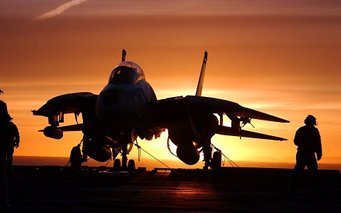 Here's a track that was inspired by the good old 1986 fighter pilot combat movie 'Top Gun'. This movie rose to fame for its use of the F-14 Tomcat fighter jets, cool action sequences, rock and roll life style and its infamous theme song by Steve Stevens (guitar) and Harold Faltermeyer (piano).

The name of my track "Fox One" refers to the brevity code used by NATO pilots, indicating a launch of a semi-active radar guided missile (such as the AIM-7 Sparrow). This was actually the first thing that crossed my mind, when setting the mood for this track. I wanted to try to capture that feeling of speeding through the air at high speed and firing rockets at the bad guys.

The track itself starts off with a cool riff that kicks into high gear allmost straight away, mimicking the lift-off from a carrier jet. The song eases off at 0m:50s into the track, to give some room for a piano piece. It kicks back in again, at 1m:10s with the piano layered underneath. This is a small nudge to Mr. Faltermeyer's use of the piano in the Top Gun theme. Somehow piano's go quite well with guitars, by which the two seem to complement eachother.

One could imagine all kinds of dog fights and chase sequences from here on in, as I try to find a balance between intense adrenaline rush parts and resting moments in the song. At 1m:36s, you can hear a pretty neat shredding bit, making use of the wah-wah technique I use in my other songs: it keeps the repetition of the shred interesting. The slowed-down drum intensity helps define the shred and it helps to keep you hooked. An extra layer of heavy-tuned guitar chords at 1m:50s, gives it that extra nudge just before the break-down.

The break-down at 2m:06s features a piano bit and a dulled-down guitar. The repetition of that same riff at 2m:20s is actualy the same guitar, but with a different wah-wah setting and more accents. At 2m:36s (when it starts to kick back in again), you can hear a nice destorted upward pitch bend to lead the up-tempo part, back in.

The 1986 Top Gun original movie trailer that inspired my own track.