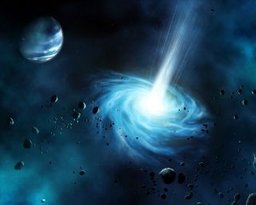 "The Demise Of Antares"

This track was my sixteenth track released on YouTube.

After playing space-themed video games a bit too much, an idea rose for another track. During our brief existence, many stars are born throughout the universe. On the other hand, just as much of them disappear during that period. A star's demise however, doesn't happen quietly. I myself have never seen it happen, though. But what if..

Wouldn't it be cool if you could see it happen. What if we actually had cameras up there that recorded the whole event. I know, it's really far away and it would take years just to get the feed across. But...what if we could. The stuff out of Star Trek eventually became reality too. Remember the Enterprise and Lieutenant Commander Data's touch screens on the bridge, the fleet's communicators or Picard's (I)padd?

Ok. So if we had the technology, what would happen if one of our largest stars 'Antares' was about to go 'supernova'? We'd send out our camera pods to investigate live at the scene and have CNN report it as it unfolds. It would be a violent spectacle..messy too.

To illustrate the events musically, I came up with this track. You can see my 'live report' on my youtube page, where I placed closed captions in the video. The track is inspired by the mother of all epic tracks; Lux Aeterna by Clint Mansell. My track is roughly divided in six parts: There's an intro (0:46), a build-up to 'first contact' with the star (0:47-1:18). Then you have the bit where I'd image some establishing shots of the surroundings would be featured (1:18-2:15). Then there is some suspense build-up prior to the event (2:15-2:46), the actual supernova event (2:47-3:16) and an outtro (3:17-3:38).

"The Demise Of Antares"