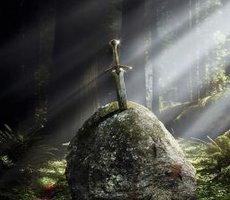 This track was my eleventh track released on YouTube.

Excalibur, the legendary sword of King Arthur. This was the starting point for this track. Not to say that I had the actual sword in mind when I began this musical adventure, but more or less the feel behind it. The era in which that story took place and the idea of chivalry in general, got things going.

The concept of this track was to build momentum with the song and to give it a feel of heroism, trial and ordeal. I wanted to create a song on which the listener could almost image an entire story around it. You could imagine a knight on his quest to retrieve a magic sword, which takes him past treacherous mountain paths and steep cliffs, getting battered by rain and wind. His journey home would have him battling wave after wave of relentless enemies, wielding his shimmering newly acquired sword, dishing out swift justice for his fallen comrades, yet returning home safely to his wife and children.

This song would be the last track on my album. I wanted this track to reflect all the things I've learned along the way. I also wanted to make a style-blend of all my biggest guitar heroes and add a touch of modern techno-ish, whilst still remaining in that King Arthur period. If you listen closely you could recognize some of the influences I used: The techno side from Rammstein and Machinae Supremacy, The Neo Classical influence and theatricality from Malmsteen, the tremolo and legato technique (yes, I've picked up on the terminogoly :) from Satriani and that talkative sound and emotional charge of Vai.

I started the song with a sturdy guitar riff and some hi-hats, building up momentum with the snare and switching over to a faster riff. The slow piano chords give it some depth. The song quiets down to give room to the English horns and the main guitar. The lofty piano bit provides the track with some lightness and changes to a very uplifting tune along the way. After this, the tracks builds, expands and peaks near the end, using 15 layers of audio, all at one time.

Available on the album 'No Strings Attached'.