About the album "No Strings Attached"

• Wouldn't it be great if I could really reach people that like my music, by actually selling an album?

• Is this even possible for the average Joe?

• Will I need a record label to do this? I don't want to be rushed in making songs by any studio.

• How do I keep independent? I don't want to lose the rights to my music.

• Will my music sound good on any and all sound systems?

• What are the requirements to get my stuff out anyway?

• Doesn't all this cost a fortune?

These are some of the questions that raged through my mind, when contemplating to release an actual album to the public. Youtube is great, but seeing your work as an actual album just seems tantalizing. I searched around on the internet and found out that music has evolved, since I last checked. There's no need to get involved with an actual record label. No need to send in your demo and praying that they'll pick it up. It's a new era. You'll get to decide what's best for you and your music. It's the era of the online distribution.

You have your iTunes, Amazon, Rhapsody, Spotify and so on, all eager to distribute your work for you. But hey, let's be realistic. My songs on Youtube aren't actually broadcast ready material. All the tracks have different volumes, they don't have the same dynamics. When I would put them in my stereo, I would have to adjust the volume between the tracks as the volumes between them would differ. One track would have a lot of bass, the other would have little and so on. I probably haven't reached the full potential of those tracks yet. Who can blame me; I don't have expensive monitor headphones or calibrated speakers, a mathematically correct listening room or any other techno-wizardry for that matter. I'm not a music engineer, but wait....I could find one.

What I needed was someone who could master my tracks. If people like my music and think about actually supporting me by buying it, in return for their kind gesture I want them to buy the tracks in the best quality possible; all ready and mastered. In mastering, the engineer looks at your final mix and tells you about the stuff it is lacking and how to improve it to studio level. Sometimes this requires some actions by yourself (like adjusting the volumes in your mix), but most of the time the engineer does his magic. In the end, the track will be completely ready for playing on any stereo equipment (including portable devices).

A mastering studio can also act as an intermediate to those online distributers like iTunes and Amazon, because as it turns out, online distributers do not want you to send your music directly to them. Mostly because they require an International Standard Recording Code and/or Universal Product code.

After some searching, I found a company called Musictrades and its publishing partner DMI Records that could do just that: help me improve my music by mastering it and get it up for online sales, with all the legal hocus-pocus arranged. They explained the techniques and requirements behind it all and to convince me, offered to master one of my tracks for free. If it wasn't the thing I was looking for; no harm, no foul. The first thing they asked was to adjust the example track to give the engineer some 'headroom' to work with. In Reason you can see the amount of headroom your mix has, using the 'big-meter', all the way on the top of the rack.

Most mastering engineers will ask for around 6 dB of headroom to play around with. This means that the yellow dots on the peak meter can go up to around -6, but not over it. If you see a red 'clip' dot appear, you've pushed it too high and the sound will result in a distorted peak. You can play around with the volume of your mix to adjust this. I managed to achieve their requirements and uploaded the track to their secure server, so they could try and convince me. They did their magic on one of my songs and I was sold after hearing the results. They brought back clarity to the track I did not even know putting it in there myself. Apparently it got muffled under the other instruments. They equalized the sound and compressed parts of it in such a way, that all individual instruments where audible again.

It sounded crisp and fresh, in ways I've never heard before. I decided that this was just the thing I'd like to achieve when selling it online. Something extra, that could really push my music forward.

Here's a small grasp of what mastering does to your track:

• Adjust and level the volume between tracks

• Put the songs in sequence for the album

Once all the tracks were mastered, the engineer placed them back on the secure server for me to download and review. A good engineer allows you to give feedback and implement any wishes you might have (like "make the drums louder", or "more warmth on the guitar"). When I was completely happy, he asked one last important thing:

"What's the name of your album and the tracks and can you send me the cover you'd like to be displayed?"

I did not see that one coming, really. I always named them 'guitar music 1', 'guitar music 2' and so on. I sat down and came up with some names for the tracks and also came up with an album name. My music is all done on a MIDI keyboard, without an actual guitar. What better way to describe my work than with 'no strings attached'. It even has a double meaning as a bonus. I tried to visualize this in the cover art. You'll see a guitar and a pair of scissors cutting the strings and some piano keys, translucent over the guitar body. After all tracks were finalized the company arranged all the requirements needed to put it online.

It sure has been a great journey. Publishing your music hasn't been this easy as it is now.

I hope that over the years, the sales will at least cover my expenses. It's good to know that the album will be available indefenitly, now that it's released online :) Any proceed after covering expenses would be an even bigger boost to keep making music, in the hopes to inspire more people to take the plunge and get their stuff out in the world. If you also like to get more out of your own made music, be sure to do some homework:

If you still have any remaining questions, feel free to drop me an email. 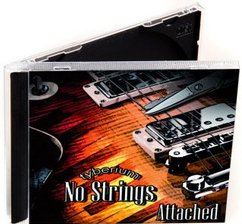